Sheila the She Wolf

Sheila the She Wolf is a character in GLOW. She is portrayed by Gayle Rankin.

Sheila the She Wolf is a therian and believes that she is spiritually a wolf.

When the Gorgeous Ladies of Wrestling show is created with various stereotypes, various characters are created for the ladies. However, Sam Sylvia, taking one look at her existing persona, decides that there is nothing that can be done to improve upon it. Thus, she is Sheila the She-Wolf for the program. ("The Wrath of Kuntar")

She is a very light sleeper and insists upon sleeping with all the windows in the room open, as well as sleeping in costume. ("The Dusty Spur")

She tries to completely ignore her birthday, but when she lets it slip to Ruth, Jenny overhears and insists on throwing her an elaborate birthday party. She is at first completely against the idea, even going so far as to hide out in a nearby woods. Ruth convinces her to attend the party, at a rollerskating rink. To everyone's surprise, she really takes to it, getting so into the skating that she won't stop even to come and blow out the candles on her birthday cake. ("Maybe It's All the Disco")

Although her wrestling persona is very butch, an encounter with Bobby Barnes places her in touch with her feminine side. During a camping trip, she discards the She-Wolf persona, tossing her outfit into a campfire.

This article is a stub. You can help Glow Wiki by expanding it. 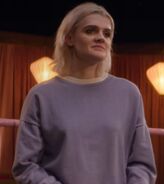 Sheila, after ditching the She-Wolf persona
Community content is available under CC-BY-SA unless otherwise noted.
Advertisement