Keith Bang is a character in GLOW. He is played by Bashir Salahuddin.

Keith is Cherry Bang's husband. He becomes the Gorgeous Ladies of Wrestling referee, after being hired by Bash when Sam tells him that they need a referee. ("Live Studio Audience")

After GLOW moves to the Fan-Tan Hotel & Casino in Las Vegas, he and Cherry attempt to conceive a child. Cherry, however, eventually admits to him that she isn't sure that she really wants to have a child, worried about what a pregnancy might do to her career. This causes him to walk out on her, leaving Sam Sylvia to take on the role of referee.

He later returns at the urging of Carmen Wade, acting as Cherry's Secret Santa. He appears following the GLOW production of A Christmas Carol, dressed up in a Santa suit. He tells Cherry that while he was away, he saw a woman... about adoption. He tells her that this way, she can still have her career and her body, and he can stay home to watch the child when needed.

This article is a stub. You can help Glow Wiki by expanding it. 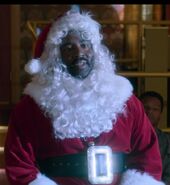 Santa Keith
Add a photo to this gallery

Retrieved from "https://glow.fandom.com/wiki/Keith_Bang?oldid=5476"
Community content is available under CC-BY-SA unless otherwise noted.